On paper, 2013 has not been able to match the pace set in 2012 for venture capital-backed companies looking to find an exit, though it has by no means been a slow year. The number of VC-backed exits was down almost 14% from 2012 and capital exited lagged by a whopping 46%. However, it is important to note that 2012’s exit volume was bolstered by the massive $16 billion IPO of Facebook, and an unusually large final quarter, which was likely inflated due to the impending increase in the capital gains tax, which took effect on Jan 1st. 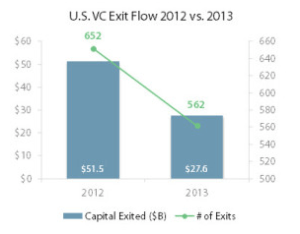 Even though 2013 has not quite lived up to the mark set in 2012, one of the dominant stories for
venture capital exits arena is the huge uptick in IPOs. The strength of the public financial markets throughout the year has allowed venture-backed companies to utilize IPOs in numbers that haven’t been seen since 2007. IPOs grew from just under 8% of VC-backed exits in 2012 to nearly 15% in 2013.  Without a doubt, the poster child of the 2013 exit scene was Twitter, which famously broke the news of submitting a confidential S-1 by appropriately sending out a tweet. 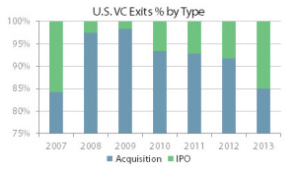 While companies like Twitter and Tableau Software garnered lots of media attention and speculation surrounding their IPOs, the remaining 85% of exited companies opted for acquisitions—an avenue with a little less flash but the opportunity for investors to fully liquidate in one fell swoop. Below are a few notable acquisitions in 2013, and how they have produced some impressive returns for their venture capital investors. All returns calculations are estimates based off of information obtained from the PitchBook platform.

Most people who are active on the internet in one way or another have at least heard the name Tumblr at some point. Like similar sites Twitter and Pinterest, Tumblr allows its users to share multimedia with friends in a “micro-blog” format. Although Tumblr didn’t quite reach the magnitude of Twitter, which boasts a market cap of $32 billion, I think that any sane person would agree that the returns to investors created by the company’s $1.1 billion sale to Yahoo in June are nothing to scoff at. The following table details the price paid for each series of preferred stock issued by Tumblr, and the cash-on-cash multiple generated for investors in a given series at the purchase price of $1.1 billion.

If you have ever watched an episode of Mad Men, you know that the advertising game is glamorous, smoky and very lucrative. While the accuracy of the TV series’ depiction of the industry may be a point of debate, companies such as MoPub have helped to add another adjective to the list of advertising descriptors: hi-tech. MoPub is self-described as a “one-stop ad serving platform designed for mobile application publishers to manage their ad inventory on iOS and Android.”  Given that a huge proportion of Twitter users access the site via a mobile device, it is no surprise that Dick Costolo and crew snatched MoPub up for the lofty sum of $350 million in September.

Social media has clearly become pervasive in everyday life for hundreds of millions of people worldwide.  More and more of us are sharing information about ourselves, our friends & families, our preferences and everything else, so it was just a matter of time before people figured out ways to use the information that is being shared with the world. Topsy Labs is doing just that. The company’s platform allows users to track and analyze data from all of Twitter’s tweets since 2006. In December, Apple acquired the company, clearly seeing the potential uses for Topsy’s technology. The Cupertino-based tech giant did not disclose the final purchase price, but reportedly paid around $200 million, and possibly substantially more. Below are multiples based off of two potential purchase prices: $200 million and $225 million.

Once again, advertising is an area where big money can be made, and Adap.tv is looking to help the industry tap into some of those potential gains. The San Mateo-based company provides a video advertisement marketplace platform that allows advertisers and ad-space sellers to connect with one another and improve the deal-making process.  Adap.tv was acquired in September by AOL for $405 million, earning solid returns for investors.

As we can see, despite the fact that the IPO was the darling of the venture-backed exit scene in 2013, M&A remains the dominate avenue for investors and entrepreneurs seeking liquidity.