Every time I see blog posts referencing multiples on VC investments, I wonder if writers or readers appreciate how hard it is to generate these kinds of multiples and how multiples should really be calculated.

Obviously, the way to calculate a return multiple is to divide the amount returned from an investment by the dollars invested. If I invested $10M in a company and got back $100M, that’s a 10X return. Seems pretty straightforward, right?

The problem arises when multiples are inferred from incomplete data. It’s quite rare that anybody but the fund manager actually knows the dollars out and dollars returned by a specific investment. And if you have incomplete data, there are usually a number of things that go into calculating or estimating the return. Here are a few other things to think about.

How to Actually Calculate a Investment Return Multiple

Remember each round of financing further dilutes early investors’ money.

Let’s say a seed investor put in $1M in a company’s first financing round at a $10M post-money valuation. The company ultimately sold for $200M. So, one might infer that the seed investor made $200M/$10M= 20X their money.

Unfortunately, this is almost never the case.

In almost any outcome like this, the company goes on to raise more money, usually at higher prices. As new investors come on board, all existing shareholders of the company will have their ownership stake in the business diluted. This also happens when a company expands their option pool.

Here’s how that plays out for the seed investors.

Let’s say this theoretical company raises just one more round of financing. It’s a $10M round at a $50M post-money valuation. And as part of the round, the option pool of the company is expanded by an additional 10%. After this round, the company has their $200M exit.

In this example, the flow of the math would be something like this: The seed investor owned 10% after the seed financing. In the next round, the seed investor’s ownership is diluted by 30% (20% due the new financing and 10% due to the expanded option pool).

So the seed investor’s ownership was actually 7% at exit. Thus, their $1M returns $14M?—?a 14X return. Pretty great, but meaningfully different from 20X.

Another way to look at it is the effective post-money of the investment. At the seed, the investor bought 10% for $1M. But when it was all said and done, the investor actually bought 7% for $1M. It was like they invested in the company at a valuation of $1M / 7% = $14.3M.

But most companies do not have a straight shot to a multi-hundred million dollar exit with just a seed and Series A. Most raise multiple rounds, and dilution happens at each round.

Below is a sample outcome table for a few scenarios. 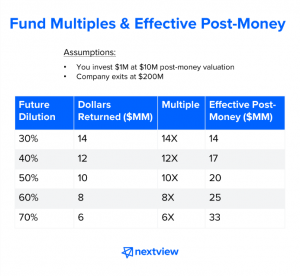 What this shows is that the investor’s multiple dramatically changes depending on how many rounds of financing occur after the initial round and the level of dilution of each round.

I like thinking about this in terms of effective post-money because it creates a more visceral reaction. If this company goes on to raise multiple financing rounds such that new investors and future employees end up with an additional 50%, the seed investor mathematically invested at a $20M post-money valuation. Still good, but not what you think of as seed-stage prices.

This is why celebrating big financings isn’t always such a great thing. Apart from the screwed-up incentives that can arise from overcapitalized companies, each time a company raises money, all prior investors get diluted, which increases the effective post-money of all the earlier dollars.

Factor in all the dollars an investor puts into a company?—?not just the initial round.

But one might say that this is precisely why it’s important to invest follow-on capital?—?it helps you protect your ownership. This is true, sort of, but leads to another misconception around multiples:

One needs to consider all the dollars someone invests into a company at each round, not just the initial round.

The problem with follow-on financings is that they have a similar effect to future dilution. Each time an investor puts money into a follow-on round, she preserves her ownership, but increases her cost basis and effective post money.

Back to our hypothetical company and angel investor that invested $1M at $10M post. Let’s say that company raises just one more subsequent round of financing that is a $10M at $50M post again. But this time, let’s assume the seed investor decides to “lean-in” and write a $2M check at this stage. So, what happens is:

Quick: Is this investment a 10X for the seed investor who initially invested at a $10M post-money valuation?

This effect is even greater if the investor puts capital into multiple future financing rounds, even if they just keep doing their pro-rata share of the round. The example above is simplistic, and I’d argue that 70%+ of $200M exits happen with more future dilution than this.

1) This is why it’s really hard to infer investment multiples from incomplete data.

Someone with only a basic understanding of venture math would think that a seed investor who invests $1M at $10M post would generate a 10X or better return in most $200M exits. But these examples show that it doesn’t take much to turn a 20X scenario into a <10X scenario. And all of the scenarios above assume the future financings are up or flat to the prior rounds. They don’t contemplate what happens if there is a down round or a recap along the way.

When you see data from VCs that talk about 10X returns and the need of 10X returns to drive the venture model, you are probably thinking that the exit size required to generate that 10X is smaller than it really is. Even the 3–5X scenarios require pretty big exits in most cases.

This is why there is some misaligned incentives between founders who might find an exit in the hundreds of millions to represent life-changing money and investors who want the company to keep pushing for an even bigger outcome.

3) This is why venture returns often decline as funds get bigger.

When a fund is getting started, they usually do much less follow-ons in the beginning (especially initial seed funds). When VCs increase their fund size, the rationale is to have more capital for follow-ons. They also need to invest more in follow-ons to deploy that much capital.

But as more dollars are invested in later-stage rounds, this increases the cost basis and effective post-money of the fund’s investment. This often drives down actual fund multiples, even if the investor doesn’t make a lot of mistakes by following-on into companies that ultimately fail.

4) The “pile in to your winners” strategy really only makes a big difference in two scenarios.

The first is when the “winners” are really really big, meaning multiple billions of dollars.

The second is when the pile-in happens relatively early. Usually, this happens because the company is under-appreciated. The investor leans in when others don’t believe and gets rewarded for it later.

Apart from these situations, I think it’s somewhat questionable whether that strategy is worth the risk of piling into the wrong companies and the negative effect of increasing your overall cost basis.

5) This is why the very best VC firms do a combination of three things:

While the math may be simple, I think it’s very important for VCs, entrepreneurs, and journalists to understand how returns are actually calculated. It took me several years in VC to internalize these considerations and a few more to actually come to grips with its implications?—?but it’s dramatically changed the way I see the business and how we’ve shaped our fund strategy.

Scale Finance LLC (www.scalefinance.com) provides contract CFO services, Controller solutions, and support in raising capital, or executing M&A transactions, to entrepreneurial companies. The firm specializes in cost-effective financial reporting, budgeting & forecasting, implementing controls, complex modeling, business valuations, and other financial management, and provides strategic help for companies raising growth capital or considering M&A/recapitalization opportunities. Most of the firm’s clients are growing technology, healthcare, business services, consumer, and industrial companies at various stages of development from start-up to tens of millions in annual revenue. Scale Finance has multiple offices in the Carolinas including Charlotte, Raleigh/Durham, Greensboro, and Wilmington with a team of more than 45 professionals serving more than 130 companies throughout the region.